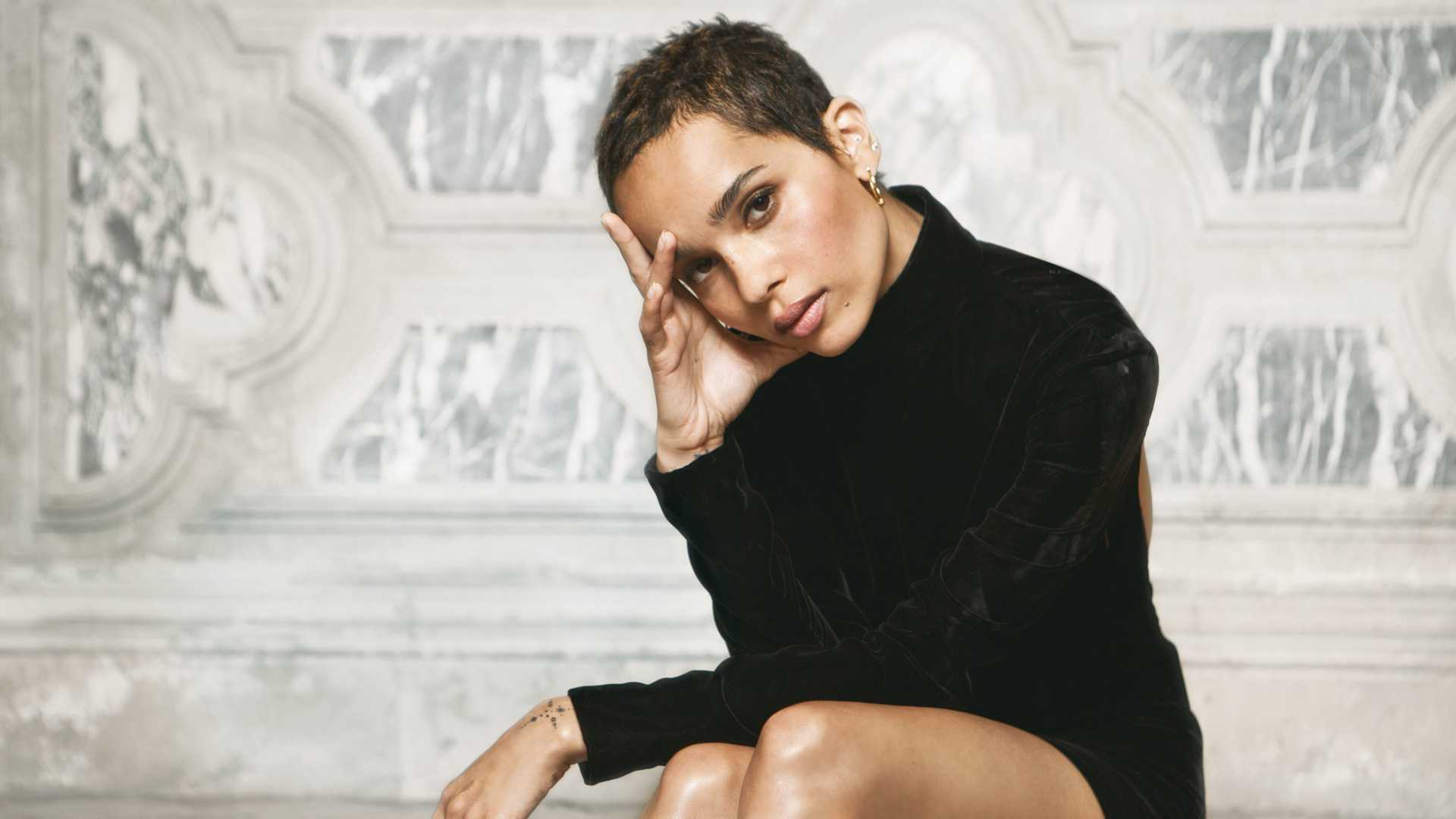 Ask a roomful of people their opinion of Zoe Kravitz and the resounding answer is that she is “cool”. She is also something of a style icon, frequently topping best-dressed lists. In person, she is “cool” – but pleasingly without the unapproachable millennial vibe you’d expect from a 29-year-old Brooklyn-based actor born in LA. Of course, genetics has something to do with the cool factor. As the only daughter of the multi-Grammy-winning rock star Lenny Kravitz and actor Lisa Bonet (the couple divorced when she was six years old), it’s no surprise she’s so hip. But she has not sat back on her It-girl status – Zoe is hot property as an actor in her own right.

“I’ve wanted to be an actor from a young age,” she tells me. “From when I was six or seven I fell in love with films like The Wizard of Oz and Grease, and I would always perform for my parents and grandparents.” I was not even fully aware of the extent to which my family was involved in the entertainment industry. It was just a natural thing for me.”

Zoe’s mother, is best known for her role as Denise Huxtable in the American sitcom The Cosby Show, which she starred on and off from 1984 to 1991. On her 20th birthday in 1987, she eloped to Las Vegas with her boyfriend Kravitz.
Lisa gave birth to Zoe the following year, and the family settled in Los Angeles, until six years later when the couple divorced. During this time, Lenny’s career was gaining momentum, and he wrote and produced songs for Madonna, Vanessa Paradis and Steven Tyler. “We were very young, and it was wonderful,” Lenny told Oprah Winfrey in 2013, of his relationship with Lisa. “I see now what it was all about: it was really all about bringing this beautiful child to the planet.”

When she was younger, Zoe split her time between her parents, and she is now settled in New York with her actor boyfriend Karl Glusman (who starred in Tom Ford’s 2016 film Nocturnal Animals). In 2005, Lisa began a relationship with the actor and model Jason Momoa, with whom she has two children: 11-year-old daughter Lola Iolani Momoa, and nine-year-old are Nakoa-Wolf Manakauapo Namakaeha Momoa. In the same Oprah interview, Lenny – who has not had any other children – said: “Zoe’s mom and I now are best friends. It’s beautiful and it just shows you what you can do. ”

Zoe also fronts an indie band called Lolawolf, named after her two half-siblings, but acting is her real passion.
“Growing up, wanting to be an actor was a double-edged sword,” she tells me. “I had opportunities because of who my family is, and I was able to get an agent very quickly.” But that can lead to self-doubt.

Of female role models, she said earlier last year that “both my grandmothers and my mother planted the seeds for what it meant to be female. strong women, funny women. Humor is a big thing in my family.”

It is impossible to avoid the fashion credentials she inherited from her parents, too – both Lenny and Lisa have a relaxed, irreverent style that can be seen in Zoe. Does she mind being a icon style? “It makes me feel good, but I do not do it for people’s approval,” she tells me. “I do not think I have a ‘look’. When I see someone who is comfortable in their own skin, and being unapologetically themselves, I think it is so beautiful. up to the idea that beauty can not be defined by race, gender or age. “Although she sees the tide changing, there are still barriers. She told Vogue earlier that year that the Trump presidency is “beyond farcical.” It is not funny, but you almost have to laugh. I just called my mom and we were talking about how Trump had fired the head of the FBI, and we both started laughing .”

Last year was been a big one for Zoe, and has seen her acting career take a new route. Previously, she had mainly featured in action films (such as X-Men and Divergent), but she is now becoming known for her roles in grittier dramas and comedies. Bonnie Carlson in the hit HBO show Big Little Lies, which turned her into a household name.

Based on the novel by Liane Moriarty, the mystery murder mystery centered on a group of school-gate mothers in the upmarket Californian coastal town of Monterey Bay. Someone is killed at a school fundraiser, and a complex drama unfolds in a modern whodunit featuring women who wear Lululemon leggings with perfectly blow-dried hair. Zoe starred alongside the likes of Nicole Kidman (to whom her father was briefly engaged in 2003) and Reese Witherspoon, and she describes filming the seven-part TV drama as a “dream come true.” The series won eight Emmy awards in September, including one for Outstanding Limited Series.

“I think we are all thrilled to be surrounded by so many wonderful women telling such an intriguing story.” It is very rare to work with and be supportive of such women. “It really made me feel warm and fuzzy. It was really beautiful.”
So is Zoe anything like her character Bonnie? “I’m less like her than people think.” She’s a lot more patient than I am, and a lot more passive. I love Bonnie. It’s just kind of set back and let things happen organically. I’m more of a confrontational character. ” She has said that while growing up she saw herself as “the tiny gatekeeper trying to protect my parents, especially my dad, who’s so nice to everyone.

Last year, Zoe has also appeared alongside Scarlett Johansson in the comedy Rough Night (which she describes as “so much fun you forget you’re even being paid”), and filmed Fantastic Beasts and Where to Find Them 2. Written by JK Rowling and directed by David Yates , Fantastic Beasts: The Crimes of Grindelwald premiers in November 16th, 2018 . The sequel takes place in New York, London and Paris, with references to the Harry Potter stories. A few months after being captured, Grindelwald escapes dramatically from MACUSA and conquerors followers to his witch supremacy cause. With help from the magizoologist Newt Scamander, the only wizard capable of stopping him is Albus Dumbledore, a Hogwarts professor. In a darker era of the Wizarding World, the characters will face dangers to test their loyalty.

“I play Helena Bonham Carter’s great-great aunt. It’s an icon of mine, it’s a real pinch-me feeling to even be associated with her. I think her performance in Fight Club is one of the best by a woman in a film. ”

Zoe comes across as completely normal and measured, especially considering her upbringing.
I ask her what is her Saturday night is, and it sounds very ordinary. “I like having a few friends over and drinking wine, and watching a movie. I would rather eat at home than go to a bar – I do really good pasta.” Not what you’d expect from Zoe Kravitz at all, but if being normal in Hollywood is now considered a cool rarity, she’s right on the money.