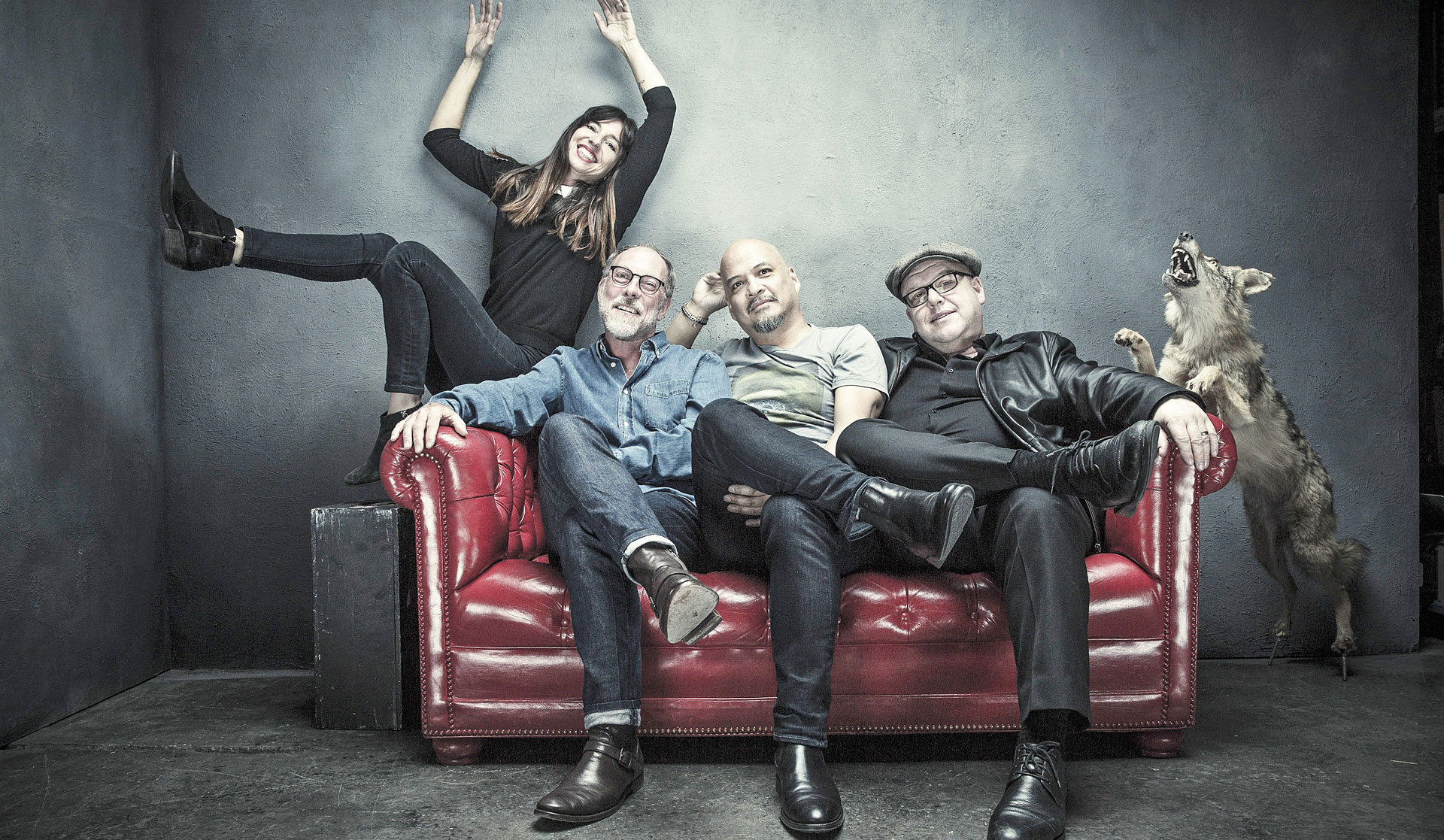 It is inevitable that with each new release of the Pixies the ears will be very tight.

The Pixies have been acclaimed as the most influential band of the late ’80s alt/rock movement, having blazed the trail for artists from Nirvana to Radiohead. Visceral, musically cinematic, otherworldly but strangely familiar and a bit unsettling, welcome to Pixies’ studio album “Beneath The Eyrie,” where tales of witches, Daniel Boone, misfits, and other characters fit utterly into the band’s inherent weirdness. “Beneath The Eyrie” is the third album from the reunion that took place fifteen years ago (the seventh overall), and it is absolutely legitimate to say that it is the best of the three.

The previous “Head Carrier” (fired in 2016) was a good album, full of great pieces, but it lacked a bit of cohesion and perhaps paid the price for the fresh entry of the former Swan Paz Lechantin on bass (to replace an element fundamental as Kim Deal must not have been certainly a joke), despite the beautiful Paz got along just fine.

Now the Pixies give the impression of knowing exactly where to go, and make a compact, inspired and incredibly cohesive record. Of course, there is no immediacy of pieces like “Tenement Song”, “All I Think About Now” and “Classic Masher,” but the writing flows smoothly and helps to compose a compelling sound picture.

The lead single “On Graveyard Hill” has all the elements of the classic Pixies Sound, as well as “Catfish Kate” is perhaps the only trait d’ union with the most catchy episodes of the previous release. Worth noting is the beautiful crescendo of the fantastic “Silver Bullet”, as well as numerous tracks where the intertwining of the Santiago guitar and the Lechantin bass make the difference in navigating the most diverse fascinations (the tex-mex in the sumptuous “Silver Bullet”), the Nick Cave of “Bird Of Prey”), to then return to the classic Pixies sound with the new extract “St. Nazaire “and close with the psych of” Daniel Boone “and the very dark” Death Horizon “.

Having reached the third act of the new recording life, the Pixies produce a record that will not have the grit and the courage of the debut, nor the peaks of the predecessor, but which in any case contains excellent moments, carrying forward one of the most precious brands with the dignity of alternative rock.

It is a joy to hear a band like the Pixies again at such high levels. “Beneath The Eyrie” is an excellent album, which definitively cements the rediscovered cohesion of the American band and reiterates once again that the Pixies are not only their own glorious past, but also have a promising and rediscovered future in front of them.

Some Pixies fans will tell you this album invented alternative rock. Others will say it invented indie. Regardless, what remains clear is that Doolittle helped is still revered by musicians today. Every indie band seems to have a Pixies cover up their sleeve, of their original songs.

A friend of mine is one of the artists on this cover album of Doolittle by the Pixies. In some ways it should be “easy” to cover the Pixies: their songs often have really clear straight chord progressions and melodies (despite a lot of the surface signifiers of weirdness), so there’s a lot of room for doing different things with those ingredients. But for some songs, it’s got to be really difficult, because a lot of the point is bound up in Frank Black’s delivery.

There’s no point doing a “respectful” cover where you try to emulate the original closely – you’ll just end up sounding almost like it but with something lacking. But for a song where the original delivery is really important, you’re really going to have to do something extra to give the new version a point.

Take Hey!. That’s an amazing song, it’s kind of a poem, where Frank Black’s delivery carries about half of the meaning. The lyrics have various shouts of “Hey!” and “Uh!” throughout, and it’s those exclamations/grunts and the multiple meanings attached to them that are really the focus of the song, what it means about sex and life.

So, basically, I wouldn’t want to be in the position of having to do a cover of Hey!. That would be really difficult. If I had to, I’d probably try and get some spoken word artist to read it out so the drama and the meaning would be the main thing, then try desperately to come up with an instrumentation to wrap around it.

Anyway, enough about me. On this cover album the group have done I think pretty much the opposite, doing a fairly straight cover but with a soft vocal that mimics a lot of the melodic variation but drops a lot of the meaning (and even one of the important “Uh!”s) out of the lyrics. You’re left with a decent chord progression and that lovely gentle solo but none of the impact.

Oh but wait the first track does exactly what you SHOULD do with a cover version, trample all over the original.

They even call it Rebaser rather than Debaser, and it’s an upbeat kinda UK urban cover, using the same tune and words of course but chopping and changing all the surface stuff around so that what comes out has a completely different feel to it. I love the way they say “Andalucia” together, and “Oh-ho-ho-ho”, together sounding like a party rather than a raving madman.

In the original, near the end Frank Black is screaming the word “debaser” while Kim Deal sings the same word in a gentle melody behind. In the cover, a female vocalist says “Ya” then the beat stops and a male vocalist does the melodic version in a kind of aggressive way. Every component is done different, and it comes out overall very different but I think kinda with the same spirit.

OK, one thing that’s for sure is that some Pixies tracks are easier than others, and maybe there was a fight over who got to cover which track when they did this album. It’s not these artist’s fault that Hey is inherently a performed poem and Debaser is inherently a glorious racket.

But when doing a cover of a track you’ve really got to be disrespectful, you can’t be tame. Tracks 2 to 5 on this covers album are such limp respectful playthroughs of the originals that they’re not really worth the time. After the brilliant opening of track 1, it’s not til track 6 that the artists start pissing on the Pixies legacy again and make some good music. From there on it’s much more interesting.

On track 6, Babyslave take Dead in an interesting kind of funky europop direction, stripping the original of it’s starkness but re-using the weird punctuated rhythm for surprisingly poppy means. Who would have thought that would be so much fun?

Then John Callaghan, who I know from past experience we can trust to be properly disrespectful and piss on old icons, does something quite amazing with Mr Grieves. I don’t think I should describe it in too much detail but suffice to say he re-uses some audio from the original together with some lovely synth stuff, rebuilding a kooky kitsch pop song directly on top of the ruins of the kooky rock original.

Another track where the original relies a lot on the vocal style is There goes my gun. In the orignal, the verses are a weird set of shouted calls like someone shouting “Friend or foe?!” to someone across a field. I don’t really know what Frank Black was getting at in this one, but what are you supposed to do if you’re covering it, just shout the same things? Luckily Ultrafoetus sidesteps that by recasting the thing so it sounds like a weird dark swingtime, um – shanty? I don’t think that’s the word I’m looking for, but it’s certainly got a seasick swagger to it. The verses are delivered as deep rumbly growls, so despite using the same words, the verse plays a completely different role: scary monster rather than nervous soldier.

So yes this album is a mixed bag but it has some great reworkings really worth checking out. It reflects well on the Pixies in some of the uniqueness of their style as well as the solidness of their songwriting (compare this against the many Radiohead covers such as the excellent Radiodread – these reveal that Radiohead write solid songs and then cover them in digital fluff to try and pretend they’re doing something weirder).