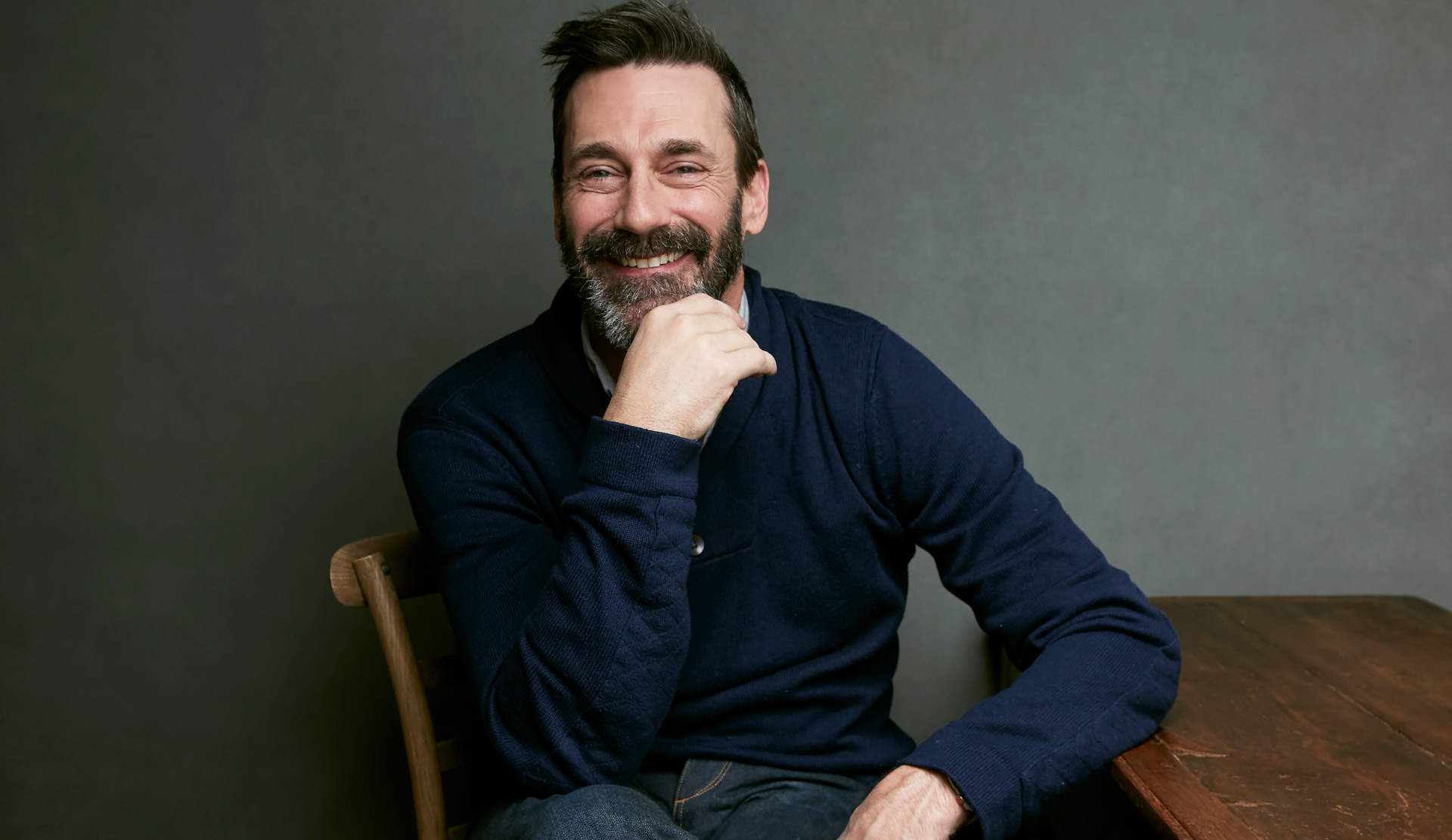 i ncredibly, Jon Hamm has been able to successfully prove to the world that there is a lot more to him than the smooth-talking advertising executive Don Draper in ‘Mad Men,’ even though it has been four years now since he sunk his last old-fashioned on ‘Mad Men.’ Aside from watching him on ‘Saturday Night Live‘ and acting as the crazy Reverend Richard Wayne Gary Wayne in the ‘Unbreakable Kimmy Schmidt,’ he’s also appeared in Matt Berry’s ‘Surreal Thesp Sitcom Toast of London’ and ‘Black Mirror.’

From playing a bank robber lover boy in Edgar Wright’s crime thriller, ‘Baby Driver‘ to playing a hologram-reincarnated dead husband in the sci-fi indie ‘Marjorie Prime,’ Hamm has been doing anything but the conveyor-belt acting of late. He explains thus, “That’s the best part of being an actor; honestly, if you wanted to do the same thing over and over again, you should probably go work in a factory of some sort. The good part of what we do is to get the opportunity – if we’re lucky – to do different things.”

There is no fact disputing that an exciting role like that of Don Draper tends to stick like glue and lasts longer than you can ever imagine. He says, “The way these business works is the thing you get famous for is the thing everybody points at and says, ‘OK, you are going to do that for the rest of your life,” he sighs. “I got known as Don Draper, so everybody wanted to cast me as this brooding, strong silent type, which is fine… except that’s my day job, that’s what I do all the time.”

Fortunately for him, spots on the Tina Fey- created Kimmy and SNL has shown that this comedic detour has been a brilliant move for Hamm. After years of obscurity, Jon Hamm has not only been able to save his career from nonrecognition but has also been able to earn himself an Emmy and two Golden Globes after spending seven seasons playing Don Draper in ‘Mad Men.’ Still, the amazing character of Don Draper hangs around the smartly dressed and well groomed 48-year-old actor. For instance, the movie, ‘Beruit,’ was a return to the “day job,” as he puts it. “It was an old style Sidney Lumet political thriller,” he adds. “I was very proud of it.”

//Acting is sort of an extension of childhood. You get to play all of these roles and have so much fun. Playing an athlete would be so cool. Or where you get to shoot guns, ride horses. I wouldn not turn down any of that.//

Hamm had a rough beginning, little wonder why he plays the role of damaged men so well. His upbringing sure gave him the outline. While he was still in his tender age, his parents got divorced, and while he was just 10 years old, his mother died of abdominal cancer. He says, “My childhood was not the greatest. I lost my Mom at a very young age. I have lovely memories of certain things, but I’m not much of a looker-backer.”

His father also died not quite long after he left home to attend the University of Texas. Having relocated in 1995 with a car and only $150 with him, he decided to take a chance in Hollywood but was still on the margins. By virtue of the fact that he was working as a waiter at the time, acting roles were almost impossible for him to come by. “I would literally fill out my tax return and go, Wow, that is not a lot of money I made this year – I made $2000! I wonder how I ate?” he says.

Hamm later made a five-year plan with the view that by the time he clocked 30 years of age and was not working as an actor, he would quit. He says, “I just did not want to be that guy who was constantly chasing something that probably was not going to happen – I did not really have a fallback position. But I had at that point taught [acting, at his Missouri high school] for a year… I thought, ‘I could do that.’ I had a perfectly lovely time doing that.” And at long last, he was able to make it winning a bit part as ‘Young Pilot No 2‘ in Clint Eastwood’s astronaut adventure Space Cowboys in 2000.

Whether or not fame changed him, Hamm says, “In my mind, I’m literally the same person I was since I’ve been cognisant as a human being, which is a goofy little kid from St. Louis, Missouri.”

He isn’t also hesitant in talking about life’s challenges on shows. He says, “I don’t love going out in public. It’s increasingly more a chore because of the entitlement people feel towards your personal life. Everybody is essentially carrying a video camera and a recorder around with them at all times, and everyone is a paparazzi. You go out to dinner, and people are secretly taking your photo, and it becomes a thing, and it’s a drag.”

Hamm starred in Bad Times at the El Royals in last fall, and interestingly, Hamm also plays Archangel Gabriel with David Tennant in Good Omens on Amazon this summer. Hamm’s also mentions doing a BBC radio show with Daniel Ratcliffe and Tennant. He says, “I was like, ‘wow, we have Don Draper, Harry Potter and Doctor Who in the same room! That’s a pretty good get for a morning show!’ Then I think I said the word ‘Shit!’ on morning radio. People are eating their morning porridge, and I cursed!”

Somewhere Don Draper must be proud.