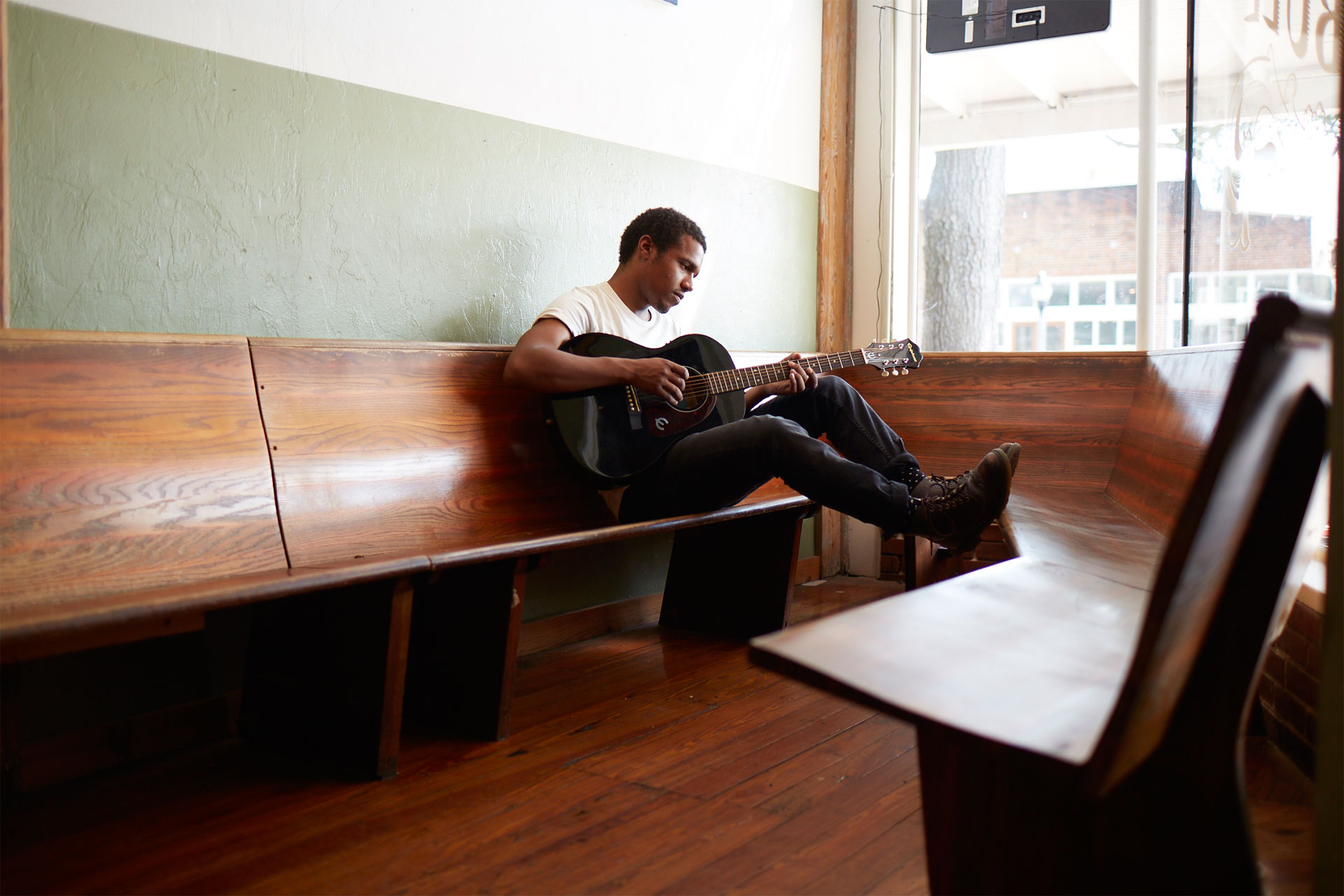 ack in 2014, Benjamin Booker was able to conquer us by presenting us his debut album with a very personal style, an almost retro sound, between blues and rock. Almost three years later, Virginia returns loaded with gospel , releasing the first single from his second work, Witness , which will be available on June 2 under the ATO Records label and produced by Sam Cohen, known for his participation in the albums of Kevin Morby. Booker returns with a greater activist and antiracist load and has the help of Mavis Staples , diva of the gospel and activist for social rights.

Booker is a key player in the generational shift that’s benefiting roots music so much right now. As a punk-loving teen growing up in north central Florida, he was turned on by that music’s dread and bloody attitude along with its freedom. He moved to New Orleans after college, absorbing the history that’s as unavoidable as humidity there. Soon he came up with his own blend, incorporating pretty much every rock and soul-related style a crate-digger would find in a dusty dollar bin at Euclid Records. Booker’s 2014 debut saw him keeping a grip on disorder, as the critic Andy Beta put it, as he pulled all those old styles close to himself and demanded they prove relevant.

The cathartic emotions Booker’s music invokes, and the witnessing that inspires them, are a crucial element of the current soul/roots scene. Like the version of “Driva Man” that the Alabama Shakes recorded for the 12 Years a Slave soundtrack or Alynda Lee Segarra’s ballad “The Body Electric,” this film demands that the injustices of the past also be faced when any of us celebrate its pleasures. These are the moments when revivalism becomes something else, something that matters — a connection between a history that remains unresolved and a future that musicians like Booker and his peers are still working to make better.

It was not uncommon, in the mid-20th century, for black American artists and writers to take up more-or-less permanent residence in Europe. Jazz musicians like Bud Powell and Dexter Gordon spent years living in Paris and Copenhagen, enticed by the artistic respect and comparative lack of racial discrimination they found while touring the Continent. James Baldwin chose the expatriate life, too: He lived in Paris for a minute, finished his first novel in Switzerland, made a home in Istanbul and eventually returned to France. His experience was complicated; as much as life in the Old World afforded a certain freedom, he felt a responsibility to participate in the struggle for civil rights in the New. But at the very least, Baldwin found that living abroad offered him a salient perspective on American society. “Once you find yourself in another civilization,” he observed, “you’re forced to examine your own.”

It’s that quote that Benjamin Booker cites in the essay explaining how he came to write his new album, Witness (out June 2 on ATO Records). After the acclaim surrounding Booker’s self-titled 2014 debut ebbed, he left the country for Mexico, seeking songwriting inspiration rather than a refuge from discrimination — or so he told himself. But after experiencing racialized violence in Mexico City — and looking on from abroad as reports of police shootings and Black Lives Matter protests peppered the news — Booker realized he was fleeing, not sight-seeing, and underwent a Baldwinesque crisis. Could he in good conscience stay away from the civilization that might very well need his voice? Could he, as guest vocalist Mavis Staples sings in the album’s title track, go on being “just a witness?”

Witness is the result of that self-scrutiny, an album that follows the cathartic thunder of Booker’s debut with moody, coiled energy and a deeper dive into the music that, as it happens, soundtracked the era when Baldwin and others were taking up residence in Europe. There’s still plenty of punk’s yawp to be found here; you’ll hear it in the heart-racing opener, “Right On You,” or if you drop the needle midway through “Off The Ground.” But on this record, Booker leans especially hard into the vintage soul-rock, gospel and blues that have underpinned his work from the start, folding R&B string arrangements and gospel piano into his guitar’s gritty rampage.

While the 27-year-old songwriter has, in the past, brushed off any conscious intent to conjure a retro sound (“I was just a music lover who wondered what it would sound like if Otis Redding strapped on a guitar and played in a punk band,” he told NPR in 2015), his slate of collaborators on Witness is telling. Producer Sam Cohen recently completed a dark reworking of ’60s hits for the Man In The High Castlecompanion album, Resistance Radio, while engineer Shawn Everett won a Grammy for his work with Alabama Shakes, Booker’s fellow purveyors of revived — not replicated — soul music. And, of course, there’s Staples, whose vital presence summons not just the sound but the moral compass of the civil rights movement — something, Booker suggests, this country needs now as much as ever.

Traveling alone, especially in a place where the language is unfamiliar, gives a person a lot of time to become intimately acquainted with his own habits of thought — for better or worse. Across Witness, we hear Booker embroiled in that process, his narrator analyzing his own inaction, his skepticism, his tendency to push away from relationships. “Listen, I just need some time / I don’t ever get this far / By now I’m always gone,” he rasps in a vulnerable moment in “Truth Is Heavy,” the closest thing to a love song on a record that’s constantly asserting its narrator’s alienation. That’s especially the case in “The Slow Drag Under,” where Booker’s voice sinks to a hoarse whisper as he channels paranoid thoughts that try to pull their victim below the surface. The struggle to stay afloat is a lyrical motif Booker returns to again and again: He’s less interested in how Mahalia got over, as he sings in “Overtime,” than in how to keep from going under.

In his essay, Booker recalls realizing that for much of his life, even growing up in the South, he’d convinced himself he could “outsmart racism.” But as he processed Trayvon Martin’s death, he’d begun to feel fear for his safety in a society that disproportionately harms black bodies — and, at the same time, frustration at his own “lack of effort to do anything about it.” In Witness’ final track, “All Was Well,” Booker seems to come back to those epiphanies: “Built around the truth to keep it secret / Made excuses all my life until I just believed it / Believed that all was well.” In resolving to make a change — “If I have my way / I’ll tear this building down” — he could just as easily be alluding to the edifices of his own mindset as to harmful social structures. So, yes, Benjamin Booker has examined his own civilization, and he’s found it wanting. But it’s clear that, along the way, he’s been examining himself.

Your music blends many different elements and you’ve been vocal in positioning yourself outside of straight-up blues, particularly. You’ve been creating your own version of the roots music canon by combining gospel, blues, punk and soul in ways that stress the music’s rawness and spontaneity. This has allowed you to not get mired in nostalgia. How do you avoid fetishizing the past when you’re playing around with classic musical forms?

It wasn’t a calculated decision. I was just a music lover who wondered what it would sound like if Otis Redding strapped on a guitar and played in a punk band. That’s it. Music helped me to get out of a rough period in my life when I really struggled to see any future for myself and was terrified about what was happening to the people around me. I had a hard time communicating how I felt before playing music and needed to get a lot out. There were conversations I couldn’t have with people I know, so I wrote friends and family songs as a way communicate and that’s the first record really — an attempt at self and communal preservation.

Your music is also very personal and individualistic. Your lyrics get at sometimes difficult emotional states, and your performance style is very direct. The rawness connects with punk, which I know is a big love of yours. How does punk play into the different way in which you’re approaching these older musical styles? Another way to say this is — punk is about the adage “rip it up and start again,” but what you’re doing rips things up and also preserves them. How do you balance those elements?

Growing up in Florida made this a lot easier for me. Folk-punk artists like This Bike Is A Pipe Bomb or Paul Baribeau were popular in the Florida punk community. I saw people early on combine roots music with more aggressive music.

I guess I balance it out by trying to not give people one genre at the same time. If I play a punk guitar part, I’ll sing a gospel melody of the top of it. If I do a blues boogie song I’ll throw in some shoegaze or noise elements.

You worked with [producer] Andrija Tokic on the last album, and he’s connected to a Nashville scene that’s combining Southern musical styles with punk in all kinds of interesting ways. Bands like Pujol and Jeff the Brotherhood, soloists like William Tyler — I feel like they’re pointing the way to a roots revival that casts off the clichés of the baby boomer generation. And there’s Alabama Shakes in Athens, and Hurray For the Riff Raff in New Orleans. Do you feel like these artists are your peers?

All of these bands have a very strong connection to the Nashville scene, which is very small. You could easily go out to the Stone Fox one day and see every band you’ve mentioned getting a drink. It’s a tight community. Andrija has really played a huge part in building up this community. His studio is incredible and bands from the area would stop by all the time when we were recording the record.

I don’t really feel connected to any music scene, but it is always nice to see bands your age cranking out some good rock and roll. The first album was so immediate and explosive. I’m curious about what your goals are for your next recording. What are the challenges you’re facing, as someone who made a big impression and also clearly has the vision to grow in ways your listeners might not expect?

The only thing I want to do with this album is make a better record than the last one.