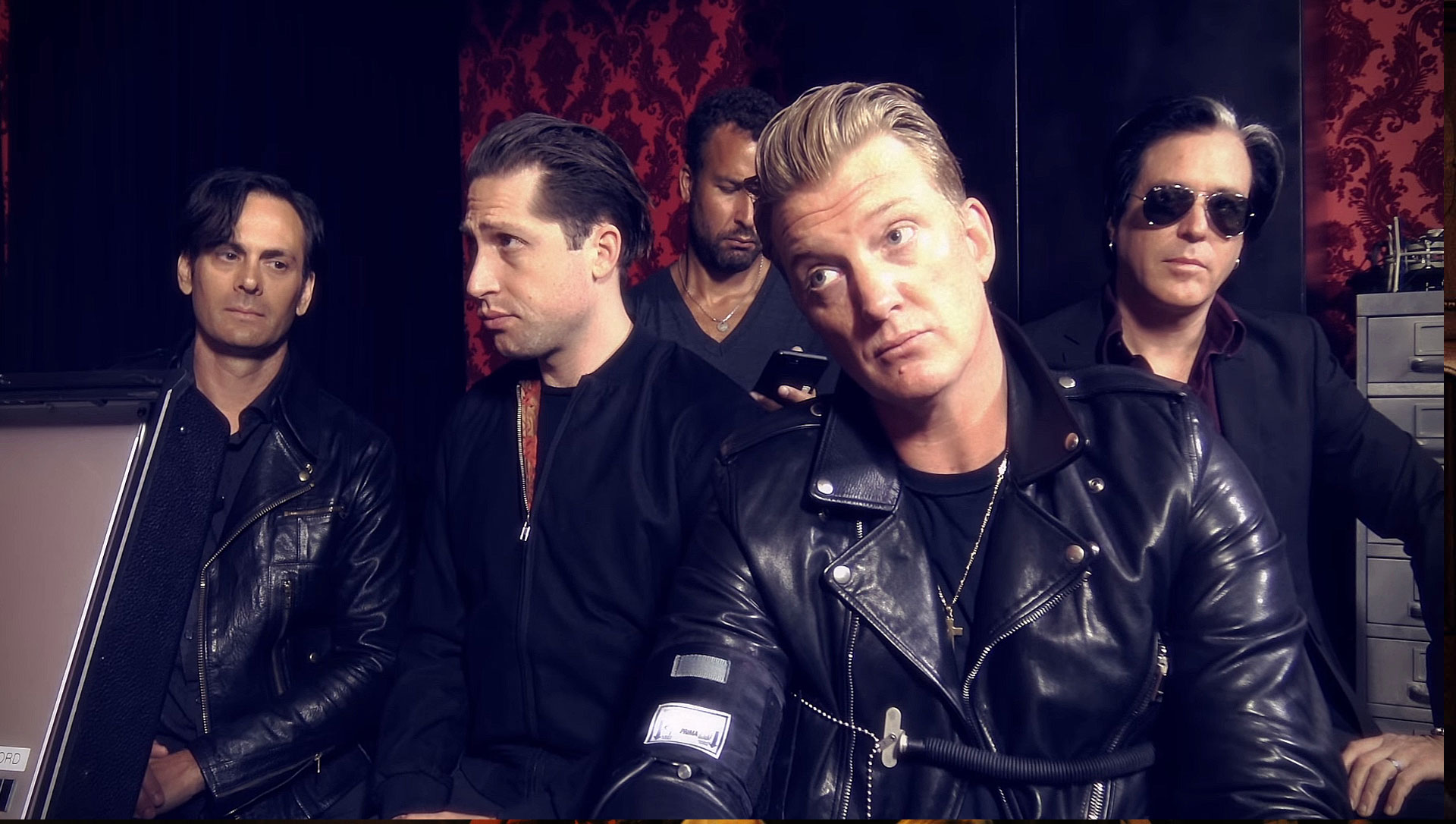 Queens Of The Stone Age Are Villains

merging from the sinister desert of California, they have entered the deepest of that arid sound proposing different landscapes from that early ?98 with the Split EP with Kyuss. Fast forward 19 years later, we have the seventh episode, the seventh moment of perverse versatility that aims to extend all seemingly established, Queens Of The Stone Age deploys a new album ?Villains,? a new landscape of sinister fusion.

Josh Homme aka Ginger Elvis has 7 albums of QOTSA, 4 with Eagles of Death Metal, 1 from Them Crooked Vultures, 10 EPs from Dessert Sessions, collaboration with Iggy Pop, and productions from Arctic Monkeys to Lady Gaga. The territory is vast and one that does not immerse itself in gender apprehensions, rather it is detached from the categories and is not maintained in the comfort zone for long. Mark Ronson is a play that precisely stands as unexpected, but after ?Villains? we get to see those invisible ties that demonstrate the profusely complimentary.

Homme and Ronson find their crossroads in their work with Lady Gaga, which between January and March of this year converge in the recording of the expected successor of ?? Like Clockwork? of the 2013 United Recording Studios in Los Angeles, California. Homme would leave Queens production aside for Ronson to deploy and unify that groove that Josh found in ?Uptown Funk.? About the use of synthesizers in this desert episode, Mark Ronson has been a push, since as they have known to discover those who are immersed in the millions of layers that make up QOTSA, those details have been gradually added, although this time has exploded to be able to savor the dance that hides behind the desert.

The formation continues unbroken from the entrance of the former drummer of The Mars Volta, a formation that in our opinion has found its power in the incredibly balanced: Josh Homme, Troy Van Leeuwen, Dean Fertita, Michael Shuman and Jon Theodore. That balance is linked to the visual directly and powerfully, as you have known about wearing the band for at least the last 15 years, dense illustrative artwork. Like the dark and complex moment of 2013, the artwork is designed by the enigmatic English artist Boneface, who consolidates the sinister through each theme in the hysteria of the sinister; illustrations that when having the album in its physical format acquire that density.

About the disputed title Homme asserts:

“The Villains title is not a political statement. It has nothing to do with Trump or any of that shit. It is simply 1) a word that looks fantastic 2) a commentary of three versions of each scenario: yours, mine and what actually happened… Everyone needs something or someone to go against, its villain, as it has always been. You cannot control it. The only thing you can control is when to let it go. ”

It’s 48 minutes back. 48 minutes of insatiable vivacious despair with those indubitably macabre flashes. The opening of such an appearance is “Feet Do not Fail Me Now.” An introduction of 1:42 minutes, the most widespread and dense that has had the band, which is submitted to synthesized passages that remind us highly of the soundtrack of Stranger Things by Michael Stein and Kyle Dixon. It makes you look in one direction so that the opening riffs hit you from behind, shaking the space with a sensual repetition “groovy,” inevitably attractive and that along the track knows to look like. It fills a great eloquent power with twists to the dark interlacing synths, irresistible and possessing a pair of breaking points that become the high points of such criminal insertion.

The malicious dance sequence continues in “The Way You Used To Do,” the first single released about two months ago as the preview of the new material. A fairly straightforward subject that points precisely to that “dancey” essence of which Homme has spoken. “Smooth Sailing” does not seem to be such a distant referent when we refer to the flavor of this theme. What is undoubted is its attraction, how it captivates from that explicit to catastrophically carnal movements.

The escapades that refer to the familiar with tricks up the sleeve are faced in “Domesticated Animals,” a subject that is said to have 4 different endings in fact. They enter into the subtleties that the voice of Homme flashes, with harmonies that sometimes return us to “Songs For The Deaf,” those that turn towards the immaterial in “Fortress.” This last passage is inserted from the vulnerability, and the eloquence of what we can lose, rooted in the lyrical wealth that Homme has always possessed, is like exposing the vulnerable and then attacking from the disease.

“Head Like A Haunted House,” explicit in its title. They keep it under 5 minutes and shout at you with their “sickly kindness of being out of control”, where the elements – layers – of such a theme that are emerging, events that are driving this repulsive – in the best sense of the word – appearance, theme in which QOTSA has been characterized with that impulse “Rated R.” Thus the bass lines are inserted like a dirty trick that flashes schizoid impulses, impulses that jump, go and around the whole passage.

“The Evil Has Landed.” Eighth track of “Villains,” which in fact leaves us traces of a “… Like Clockwork”, one that approaches from another path, but that lands those distorted hooks, harmonized choruses, without repetitive instrumental ones and with falls to the desert abyss. That is precisely what we will never be able to give away in QOTSA, the direct anchor to the desert, that although other territories derive them, always they are thrown by that arid landscape sonorous.

The closing is in charge of “Villains Of Circumstance,” subject settled around late 2014, and that would give the title to this the seventh album. A topic that starts from the cliché, but when it reaches the break becomes the exit, the escape to leave that drive to reach the unattainable.

“9 songs is fine by now, not enough,” says Josh Homme in his interview with Zane Lowe, in a very provocative way. It’s precisely 9 tracks, which will never be enough, every album that Queens has released leaves that feeling in a certain way, something not finished, or rather that at the end are still unrelated ties, which leave you hanging. That is precisely the effect, the appeal, and that is not achieved with a single review of the album, that is also the beauty, uncovering the layers.

It is naive enough to categorize this album as something more “popular,” it would be to overlook millions of elements, all those dense layers that do not submerge in the superficial. This appearance flashes synthesized darkness, passages that could be classified as science-fiction – such as the dirty theme “Un-Reborn Again” for example, dark that yes, explore certain different territories but possess that sinisterly desert drive, it is still Queens Of The Stone Age.

“Villains” is a dirty trick, a dirty trick that has to do exactly with the now – an obsession of the Ginger Elvis – and not leave unresolved issues. It has to do with everything that Queens Of The Stone Age is willing to do while impelling “desert rock” as “style” does not refer to being purists at all – not so many of its followers – being Mark Ronson the clear example. A character that according to the same band helps polish those sketches and direct them together with QOTSA.

This 2017 appearance is vulnerable. Quite a clear album and that the beat is one of its central axes, a violent, dirty and sensual beat, which suddenly leads the drums towards something a little more monotonous. The most difficult position is that of the receivers and has always been, to internalize it and to soak in its layers. Be there being “victims of circumstance,” being a victim of the irreparable facts, that you cannot control. Queens goes through all that and takes the position of villains, control everything in their hands, directing those axes now. ” Villains” is inserted perhaps as the counterpart of his predecessor, a counterpart of lusty movements with enigmatic hooks, audacious and fierce, insatiable of an incredibly dark and carnal thirst. Sinister, sensual and now.