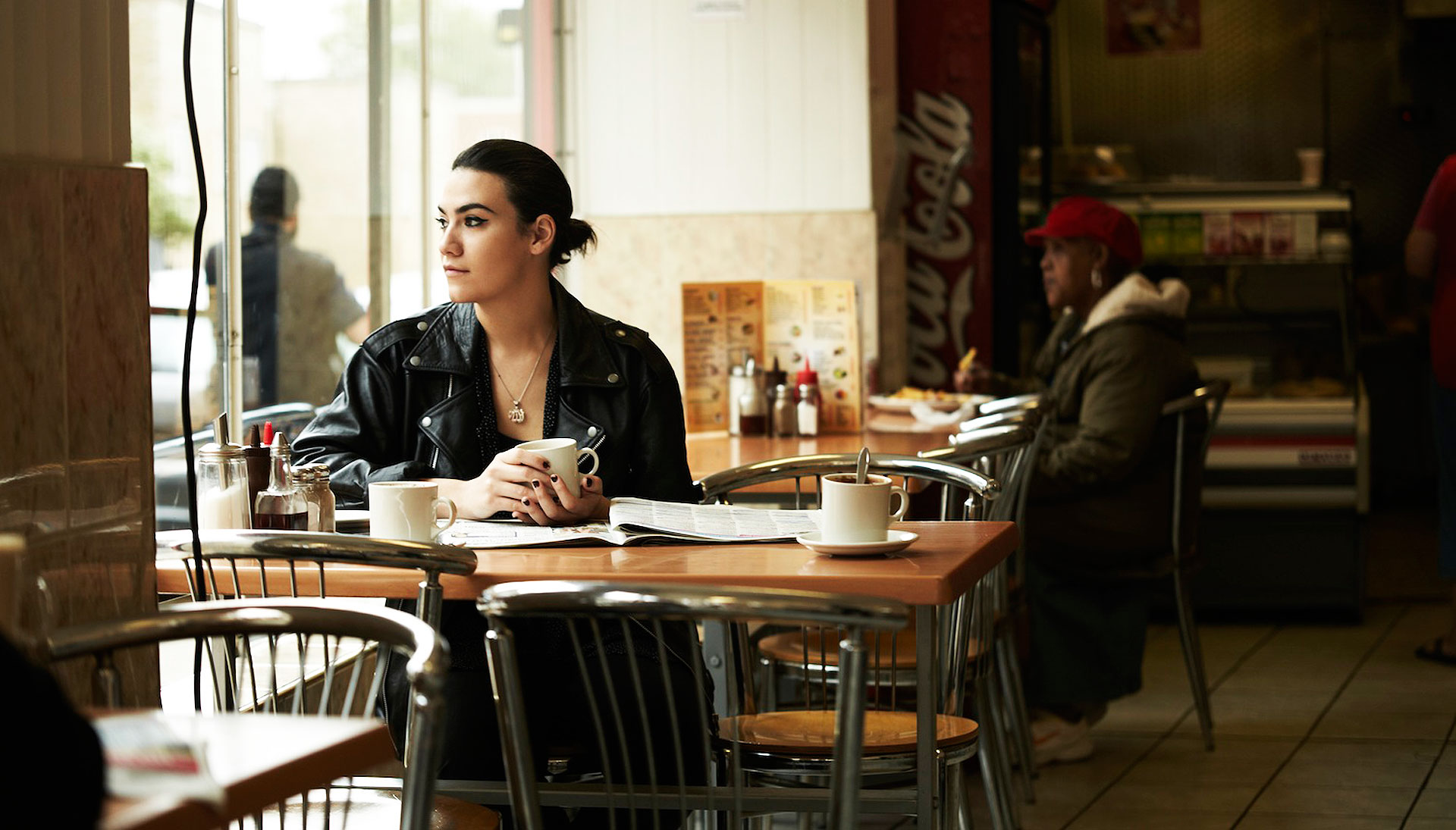 or most of us, 2016 was a tumultuous and ugly year – one steeped in political chaos and an air of uncertainty. For Nadine Shah, these headlines had been a big part of her life for years, and Holiday Destination – her brilliant and compelling third album out on 1965 Records – sees her stepping out of the shadow of the complicated relationships she examined on her second album Fast Food and taking account of the world at large.

On ‘Out the Way’ – a terrific first single that is as biting and scathing in equal measure as any of her output – Shah grapples with the fact that as a second-generation immigrant, her identity is constantly brought into question, the song appropriately ricocheting with burning intensity, bubbling over the bed of Pete Wareham‘s taut, jagged saxophone as she contemplates the rise of global nationalism.

“So on this one trip to the States,” Shah recalls, “I’m taken to the other side of the airport in this room where everyone in the room has brown skin – and they’re all looking at me like ‘what the fuck are you doing here?!’ I just made this joke, I just said – ‘oh, I’m Pakistani.’ And then everyone started to laugh. But it’s just like – that’s totally about a rise in nationalism that I’m seeing. It’s completely terrifying. Even on Twitter I’ve had people telling me ‘oh, go back to where you’ve come from’ – and I’m like what? South Shields? It’s a proper identity crisis for me. I’m a second-generation immigrant – I was born in England, I’m very English – proper fucking English, mate!” she jokes, before adding “but I’m also culturally Muslim.”

Elsewhere Shah pulls no punches, exploring equally pertinent, difficult topics with similar intelligence and personality; from global issues such as the Calais refugee crisis and the Syrian civil war, to the more personal problems of inner turmoil surrounding the pressure of social conforming, the state of our mental health and simply encouraging others to have empathy. However, despite its themes, Holiday Destination is anything but a difficult listen. From the off it immediately becomes apparent that Shah and collaborator, co-writer and producer Ben Hillier’s knack for sharp hooks and rhythms have only progressed further.

For Shah, the first ideas for Holiday Destination came back in 2014, “I saw this really shocking news piece. It was about migrants and refugees turning up on the shores of Kos in Greece by the thousands. There were some holidaymakers being interviewed and they were talking about how ‘they’re really ruining our holiday’. The fact that they had no shame in saying that whilst being interviewed, on national television… it really shocked me. This is what I am seeing across the globe: people unashamedly saying these awful things. It’s like, wow – people really don’t care and they’ll happily talk about how they don’t care. That’s why it’s called Holiday Destination.”

Whereas some artists may stumble in putting their agenda across, Nadine Shah does not falter – whether it’s the confidence exuded in the one-two punch of ‘2016’ and ‘Out the Way’, or the emotional and heartfelt vocal turns on ‘Mother Fighter’ and ‘Jolly Sailor’, this is Nadine using her exceptional voice to put her inner workings in perspective and the world’s problems on trial in one of 2017’s most crucial albums.

Amy Steele: You grew up in a small town in England. How did you become interested in singing and playing music?

Nadine Shah : Boredom! haha seriously though, I think it was just because it was apparent from a young age that I had a good voice and it just made sense to pursue that rather than something I wasn’t so good at.

Amy Steele: Were your parents first-generation immigrants? If so how does that affect your music?

Nadine Shah: Yeah my dad was born in Pakistan. I think maybe some of his culture may have influenced my vocal, but not so much the actual music. He has a great singing voice himself and sings these religious sufi songs called “Ghazals”, they’re beautifully sad love songs. People sometimes say my music reminds them of these songs but I don’t really see the similarity.

Amy Steele: What type of musical training did you have in your youth?

Nadine Shah: Not much, I was involved in a few amateur theatre productions. We were classically trained vocally but it wasn’t very intense training. It definitely taught me some good tricks and to get rid of lots of bad habits I had picked up vocally. It put a stop to me trying to imitate Mariah Carey ????

Amy Steele: I read that you write songs in pubs. So you write the words first and then come up with a melody? What is your song-writing process?

Nadine Shah: I don’t really have one certain way of writing. Just whatever works. I write lyrics often and i write piano parts often too. Sometimes I’ll write both at the same time, I wish I could work out a simpler formula!

Amy Steele: When did you start performing out?

Amy Steele: What influences you?

Nadine Shah: I think I?m mainly drawn to more macabre subjects, I heard a great quote by a poet named Philip Larkin the other day which I think sums it up nicely ?Deprivation is for me what daffodils were for Wordsworth.?

Amy Steele: Does your darker music reflect your personality/ mood or is that just a style you prefer?

Amy Steele: Have you heard Chelsea Wolfe? That might be a good double-bill.

Nadine Shah: I had heard the name but never actually listened to their music. Just Googled and her voice is beautiful, the music sounds wonderful. Thanks for the tip! Let?s give Chelsea a call..

Nadine Shah: If I knew that I?d have golden monkeys typing this for me whilst me and Kanye West swam in my pool of dollar bills.

Amy Steele: What artists do you like to listen to?